The Nenana needs your help again to stay on the CIP list for repairs! So far, the budget for the SS Nenana is the same, but that could change with the public hearing on June 25.

Right now, the boat is set up for repairs in two phases—ordinance 2020-12 regarding the SS NENANA Restoration phase I and II.

Chief of Staff Jim Williams has said, “Assuming the CIP makes it through public hearings with no changes on the SS Nenana Phase I project, we can start moving forward on the project scoping phase right away.”

Your voices saved the SS Nenana from destruction once before. We need to make sure you’re heard again on the importance of this National Historic Landmark. She is the last steamer left in Alaska that ran the Tanana and Yukon rivers. It is so important she is saved for future generations. She is a living museum of history. She is also a significant draw for tourists coming to Fairbanks to see this flagship.

The Finance Committee will be meeting on June 8 and June 25 on this matter.

Send letters and emails to the Fairbanks North Star Borough.

Letters can be sent to PO Box 71267 Fairbanks, AK 99707, with Attention as to whom you would like it to be addressed.

Public Testimony to the assembly is scheduled for  June 25, 2020, for the CIP Projects.

Speak up for the “Last Lady of the River,” who can not speak for herself! 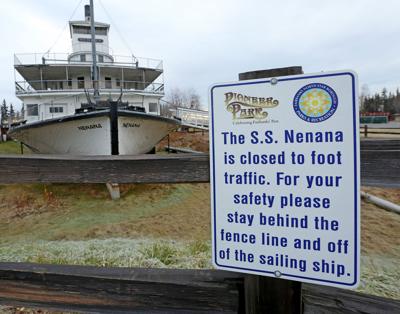 Borough leaders dug into a list of public works projects on Thursday as they continue to vet projects for a pending Capital Improvement Program.

The assembly added a SS Nenana restoration project to the list and removed a career and technical education expansion project at middle and high schools.

Attempts to remove multiple other projects from consideration failed, but the assembly directed the mayor to separate the list of projects into two lists based on whether they deal with maintenance or with new construction.

An estimated 64 projects now go back to the borough administration to score and prioritize them. The vote on the list was 6-2. Funding will be discussed later.

Work on the draft Capital Improvement Plan persisted for hours.

“Part of that decision that we are making today is that value decision,” Fairbanks North Star Borough Mayor Bryce Ward told the assembly. “What is important to us as a community?”

The first order of business at the reconvened assembly meeting was to decide what to do about the Nenana.

The historic vessel at Pioneer Park is one of three National Historic Landmarks in Fairbanks and is sliding into disrepair.

Ward had recommended preserving portions of the vessel, but said he changed his mind after hearing and reading comments from people who want the entire vessel restored.

The Riverboat Nenana is important to people, Ward said. The assembly agreed, removed projects salvaging portions of the Nenana and voted 7-1 to add a restoration project to the draft capital projects list.

After voting on the Nenana, the assembly talked about whether to separate the projects into two lists. Assemblyman Jimi Cash moved to separate maintenance from new construction projects.

Assemblyman Aaron Lojewski agreed. He added that building new facilities at a time when current facilities are behind on maintenance is unrealistic.

“It just feels like we are living in a fantasy land,” Lojewski said.

The assembly approved Cash’s amendment in a 5-3 vote.

Cash and Lojewski attempted to remove multiple projects from consideration but the assembly voted to keep them. Those projects include a new animal shelter; repairs and an addition at the downtown borough administrative center; a remodel at the Noel Wien Public Library; an expansion of the North Pole Branch Library; Carlson Center remodel and expansion; construction of a new parks maintenance shop; an indoor athletics complex; school projects; parks projects; and projects for improving recreation areas and trails.

Leaders are also being encouraged to focus capital improvement efforts on maintenance rather than new construction, multiple assembly members said.

Ward hopes to bring the scored projects back before the assembly in March, he said.

This #GivingTuesday we’re raising money for Friends of SS Nenana through North Star Community Foundation and your contribution will make an impact, whether you donate $5 or $500. Every little bit helps. And on GivingTuesday Dec 3, Facebook will match a total of $7 million in donations first come, first served. Thank you for your support. I’ve included information about North Star Community Foundation below.